Home | Car Reviews | In 2020, is the Audi R8 still the best affordable supercar? 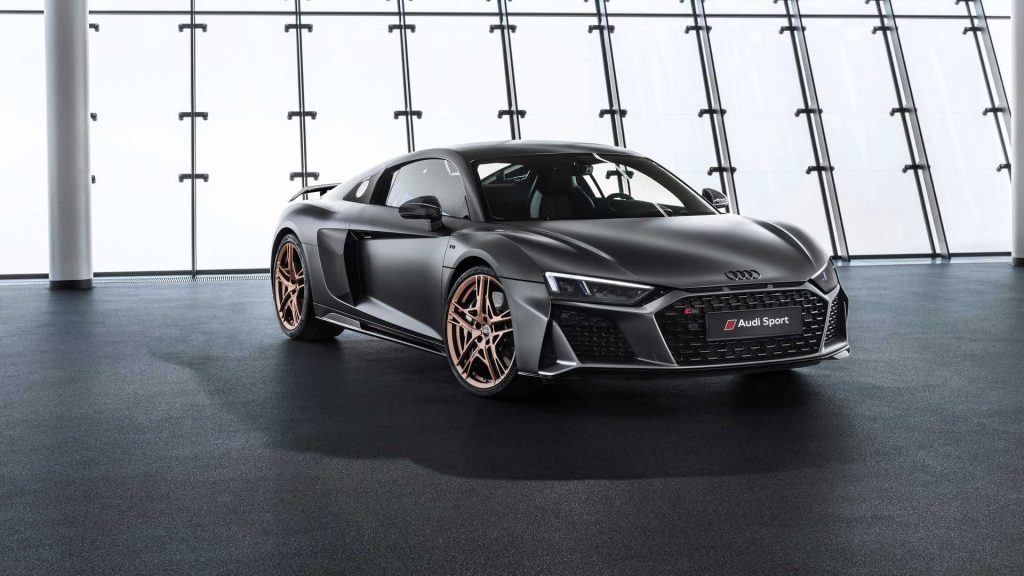 2019 marks the 10th anniversary of the mighty Audi R8. And to celebrate Audi have released a special Decennium edition R8.

This special edition R8 could well be the last which is ever produced with a V10 naturally aspirated engine.

Audi Sport’s managing director, Oliver Hoffmann, confirmed recently that the next R8 is unlikely to be built “with just a fully naturally aspirated engine or with a normal combustion engine.” And that the next R8 would indeed be electrified in some manner.

The new German supercar will be produced in a run of only 222 and the name Decennium comes from the Latin for ‘decade’. 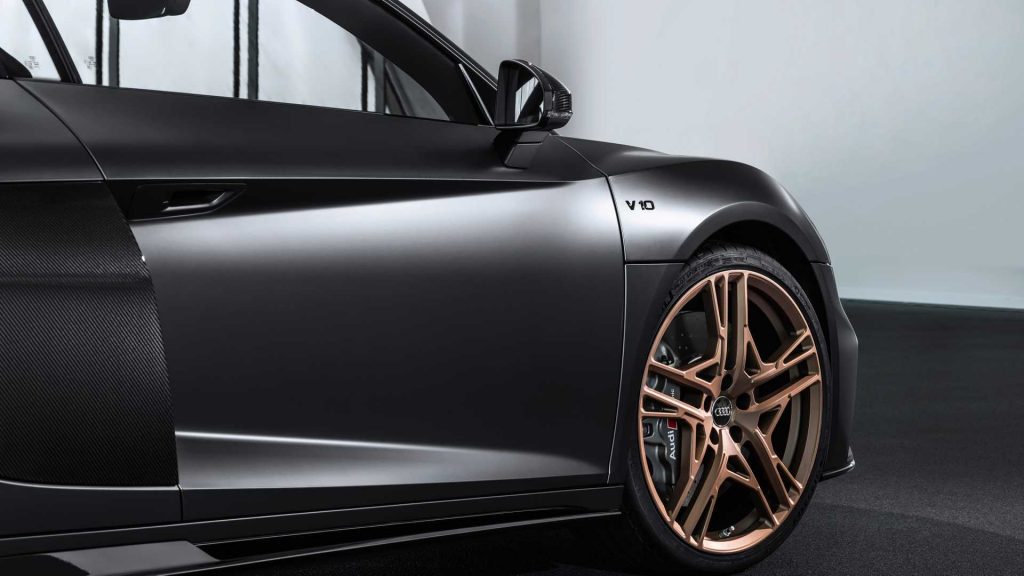 Our first viewing of the new Audi R8 Decennium was at the Geneva Motor Show, and was shown in a gorgeous Daytona Grey matt paint.

A few other features allow for this special edition supercar to stand out including a selection of black gloss aero parts, and stunning matt bronze wheels. The gorgeous matt bronze carries over in to the engine bay, highlighting the naturally aspirated V10 engine perfectly.

There is also the edition of a new carbon fibre rear wing which makes this supercar look much more aggressive. This is paired with carbon fibre side blades and mirrors.

Audi have ensured that even when you enter the car, you don’t forget that you are driving a special edition R8. They have included Decennium badges on the door sills as well as on the centre console.

Although unlike a lot of limited run supercars, you won’t find a numbered badge inside. Instead you will need to open the door to find when your model rolled off of the production line. When open, the door projects the cars individual build number on to the ground. Pretty neat!

Check out our Audi R8 listings for the best new and used Audi R8 models for sale.

Doug Demuro made the great statement that this special edition R8 is “the supercar for people who want a supercar but they don’t necessarily want to drive around in a bright green Lamborghini and have everybody stare and point at them.” 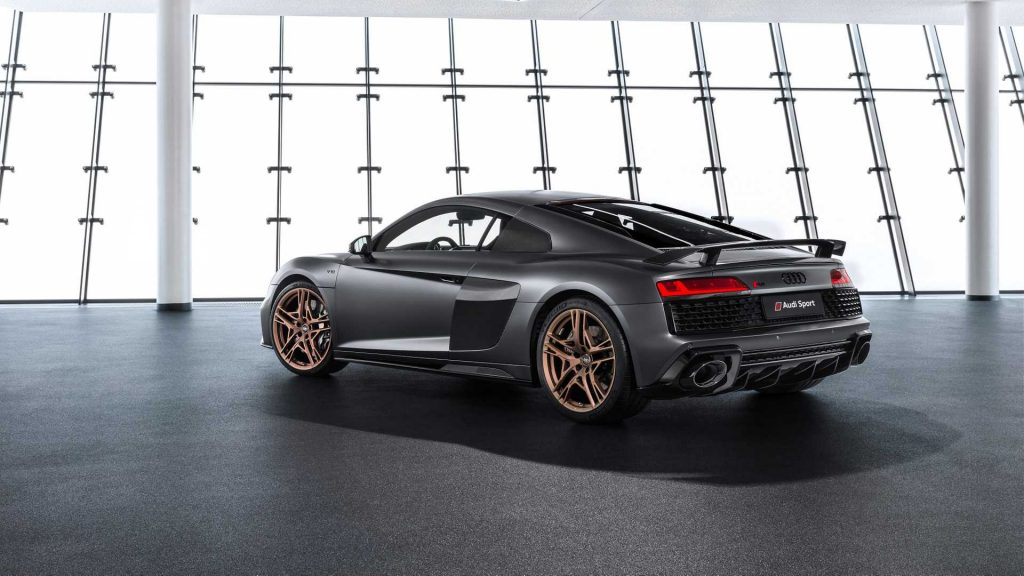 Moving on from the special Decennium edition R8, we really want to answer our original question – Is the Audi R8 still the best affordable supercar in 2020?

Well to start with, 2020 brings a slightly new look for the Audi R8, with a new facelift.

The front end includes the new Audi design feature of small inlets that sit on top of the large grill. These add to the other design tweaks which make the 2020 Audi R8 look remarkably more aggressive.

Moving round to the rear of the car, and Audi have added a similar aggressive look to the rear end. They have emphasised the exhausts more and included a larger read diffuser. Here at Drivefoundry, we aren’t 100% sure on the rear end, with the larger diffuser elements possibly looking a little over-emphasised… However we will agree that it is a more aggressive take. 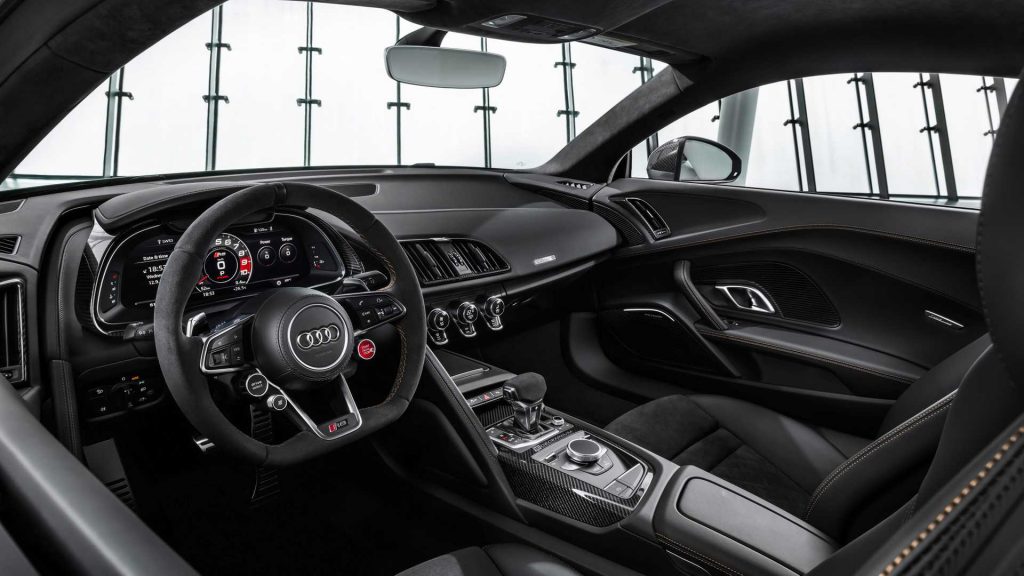 Moving on inside, the 2020 Audi R8 still remains very driver focused. Everything, including the dash is orientated towards the driver to give for a very involved drive.

The rest of the cockpit is very paired down and styled to perfection. You won’t find any over complicated elements inside the R8. Even the climate controls are all placed on just three dials. Compared to a lot of cars which take you through multiple menus to simply adjust the temperature, this is a welcome design feature.

Like many Audi RS models before it, the R8 features a perfectly proportioned flat bottom steering wheel. The Decennium steps this up by covering it in a lovely alcantara fabric.

But our favourite things about the steering wheel are the included buttons. The engine start-stop button is on the steering wheel, similar to many race cars, and just underneath that is a button which controls the sound of the exhaust. We love this! With just a simple thumb movement you can turn on the full sport exhaust and transform this car’s personality.

Along with the fantastic exhaust button sits a button with a checkered flag on it. Yes, this enables performance mode. Paired with the exhaust button, you can turn this luxury cruiser in to a track machine in seconds.

One of the great features that allow the R8 to stand out as an everyday supercar is the inclusion of child fixing points on the passenger seat. This allows you to take a child for a drive in your supercar, and really allows the car to shine as a daily driver. 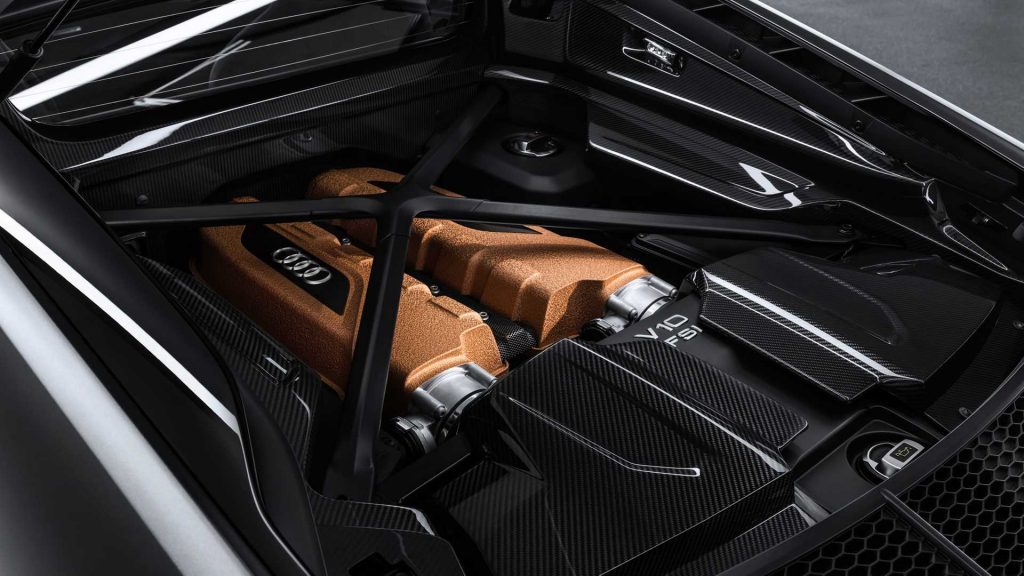 Moving on to the muscle. As we mentioned this could well be Audis last ever V10 naturally aspirated engine, with the electric era looming. Audi have certainly got their final farewell just right.

Delivering 600 horsepower and 415 pound-feet of torque, accelerating feels almost effortless. What we appreciate most about this engine is its versatility.

When driving through traffic and on motorway commutes, it is remarkably smooth. It drives very similar to normal everyday cars, and is very comfy.

However when you want to emulate your favourite racing driver, Audi has you covered. By pushing the aforementioned steering wheel buttons, this supercar transforms into a racing machine.

It pulls from 0-60mph in just 3.2 seconds which is certainly more than fast enough. It will give other exotic cars a real run for their money.

The engine is indeed the same as the power plant found in a Lamborghini Huracan, so you would expect it to be quick. Along with this the transmission is also practically the same as in a Huracan. Meaning you get essentially the same car and performance, without the “everybody look at me, I’m driving a Lamborghini” lifestyle.

One area where Audi surprisingly seem to have dropped the ball is storage. The Audi R8’s main storage compartment is up front, similar to a lot of exotic cars. When you start to pop the hood you will be thinking that you’re about to get a lot of storage. This is due to the fact that the hood runs the full width of the car.

However the actual storage compartment is rather small, and can only really fit one persons luggage bag. This is disappointing as in almost all other areas, this is the perfect supercar to drive every day.

In fact, competitors such as Ferrari have done a much better job offering a lot more storage space. 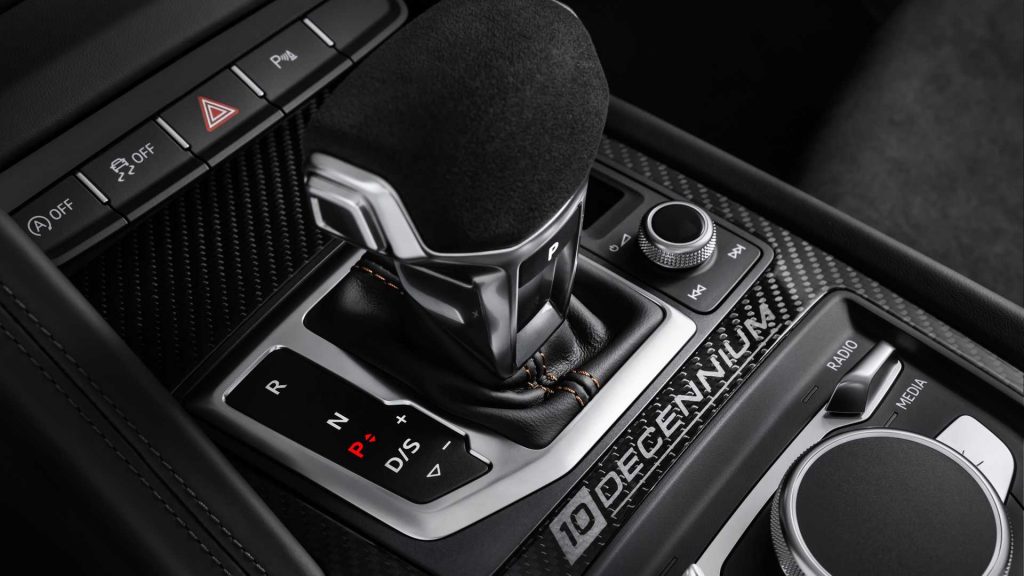 When the Audi R8 first came out ten years ago, many enthusiasts didn’t see it as a true supercar. In its V8 form, it was certainly underpowered when compared to its competitors. However the V10 went along way to fix this.

The revamped Audi R8 from 2017, made great strides to match its supercar competitors, and the Decennium edition is a true, thoroughbred supercar.

It is true, it may not quite match the high standards set by McLaren, Ferrari and Lamborghini, however the R8 sits at a much lower price tag.

There is certainly a market of supercar buyers who desire to have the same performance found in the most exotic cars, without the attention that Ferraris and Lamborghinis bring.

This is where the Audi R8 perfectly slots in.

If you are in the market for a new or used Audi supercar, check out our current Audis for sale below.