Home | Supercar Guides | The Half Price McLaren MP4-12C – Worth A Buy?

With the full range of McLaren models that are currently available, you wouldn’t have thought that not too long ago the British supercar manufacturer didn’t have a single new road car.

Due to their success in motorsport, with numerous Formula 1 championships, McLaren were associated entirely with Formula 1 and motorsport. Not with superb road going supercars.

The McLaren MP4-12C was the start of the shift.

Back in 2011, the MP4-12C launched as the companies first road car since the legendary McLaren F1. It was a car that was designed to bring new innovation to the supercar market, just like the F1 did before it.

Rather than the heavy focus on performance that the F1 had, the MP4-12C pushed forward in the supercar usability factor. It was the car which lead to an entire lineup of McLaren supercars, and put the British manufacturer firmly in competition with other elite supercar builders.

Our goal in this article is to give you a full used McLaren MP4-12C review and buyers guide. We will show you why we believe the 12C (as it is now known) is one of the best used supercars you can buy for under £75,000.

For a car which originally cost £168,500 when it was launched in 2011, the 12C is now within the affordable category for many. For the price of a well equipped high end German saloon you could be driving a mid-engined British supercar.

It is true that when the MP4-12C launched back in 2011, it wasn’t the most well received supercar. When it was delivered to its first customers, the satellite navigation barely worked and some owners couldn’t even open the doors!

Just over 1 year later McLaren released a vastly upgraded car, fixing all reported issues and increasing the power output to 616 horsepower. This update included the removal of the “MP4” moniker from the name, rebranding it the McLaren 12C.

McLaren even went to the length of upgrading all of their customers cars which were purchased prior to the update. This means that all cars on the road should have had this upgrade and be in good working order.

With the upgrade in place, the McLaren MP4-12C was a highlight of the early 2010’s, ushering in a new era of affordability and drive-ability. Compared to it’s main rival, the Ferrari 458, this British supercar was cheaper, faster and more advanced. It set the foundation for later McLaren models and brought with it technology more accustomed to a £500,000 hypercar.

The MonoCell chassis in the 12C was made completely of carbon fibre and weighed only 75kg. McLaren built the chassis and its attached structures to be easy to repair. The front and rear structures bolt on and off with relative ease, and all exterior panels are easily replaced. The chassis itself was more rigid than any other Ferrari built before it.

One of the cars statement features are the wing doors. In truth these are completely impractical for a British carpark and completely go against our argument that this car is one of the best everyday supercars… However a supercar needs a certain level of flair, and this is one of the compromises we are willing to look over.

One of the true achievements of the 12C is its McLaren ProActive Chassis Control (MPCC). This adaptive driving system controls a wide variety of elements through the car, including power delivery, throttle response and suspension setup.

The completely independent double wishbone suspension setup, paired with the MPCC allows the 12C to be driven as a super soft daily driver similar to a regular saloon, or setup to be a pure-bred race car. 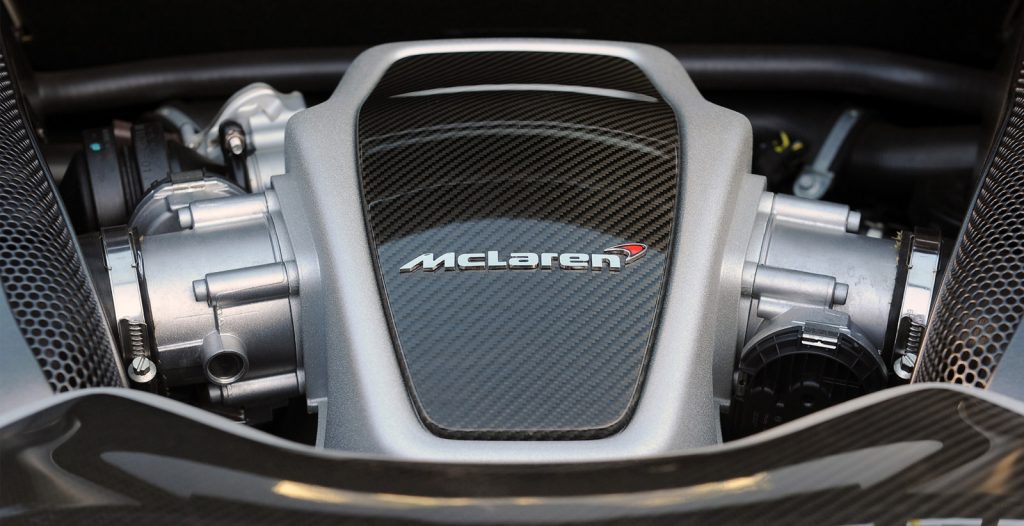 Powering this mid-engined supercar is the same 3.8-litre twin-turbo V8 engine which is present in all McLaren road cars to date.

It initially started life producing 592bhp with 442lb ft of torque. Since the mid life upgrade, McLaren have pushed the output to 616bhp.

Although the engine is the same as that in the newer 570S, the response isn’t the same. McLaren have spent the past few years tuning this aspect of the power plant, and everything is much sharper in the new models.

If you are wanting for a similar response in the older 12C, there is a track mode. This sharpens up the throttle response, and is the mode we would leave engaged whenever we drive the 12C.

In a similar vein to all the other aspects that McLaren excelled in when building the 12C, they also produced a supremely good transmission. The companies technological and Formula 1 ties shone through when designing the gearbox and all aspects of the transmission.

The seven-speed dual-clutch box has a similar level of dynamism as the rest of the car. This allows you to set the shift speed according to your style of driving. You can have soft gear changes if you are cruising or razor sharp racing style shifts, similar to a GT3 car if you fancy it. 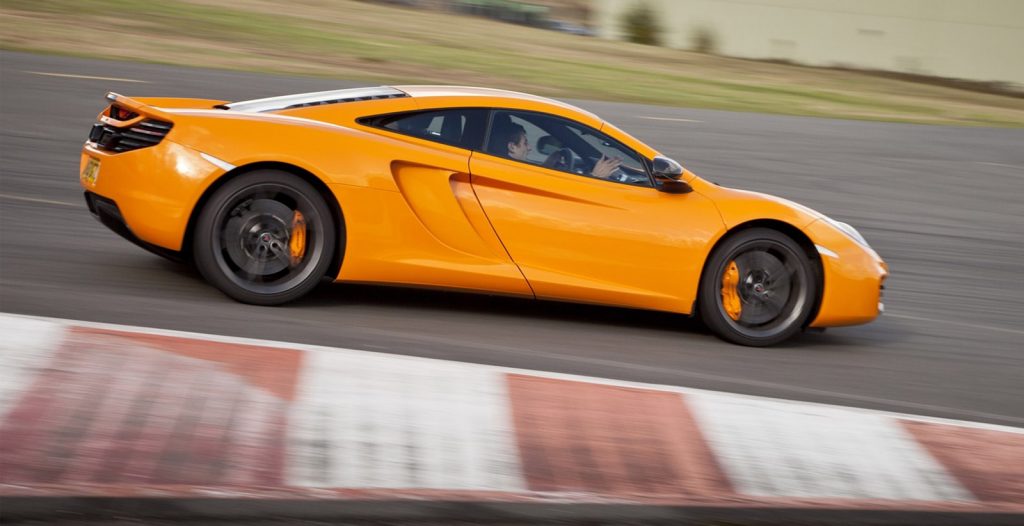 At the time of release the handling of the 12C was praised. The adaptive dampers with electro-hydraulic roll control provided a great steering response.

The weight of the steering in some of the racier driving modes is fantastic. You can feel the road and you have a great feeling as to where to place the car.

However stepping out of McLaren models from recent years and in to the 12C, there is a noticeable gap in handling response. Newer models do have a much sharper turn in and you can place them with pin point accuracy. Where as the 12C it feels a little heavier and you have to work that much harder to hit that same apex.

Considering supercars of today cost vastly more than the 12C ever did, the level of quality that the 12C does deliver is remarkable given its price.

This firm steering and suspension are also perfectly serviceable on British B roads. Simply switch the dials to comfort mode and the MPCC dampers are capable of offering a supremely soft and comfortable ride. 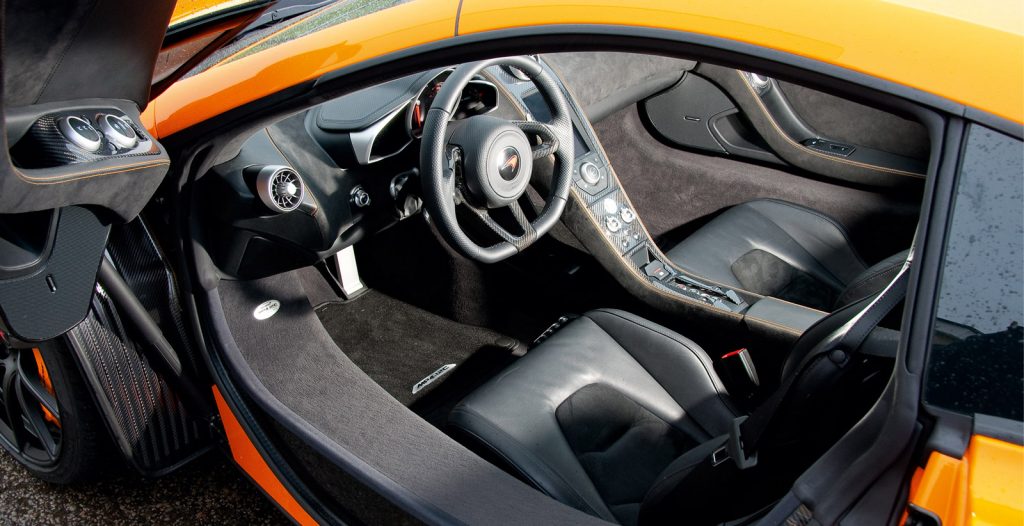 McLaren also applied its technological design process to the super clean interior. Due to the carbon fibre tub, the interior is fairly tight. This means for McLaren to work in a centre console screen, they had to flip it in to a portrait aspect.

The bespoke infotainment system along with two “control” dials give the driver almost unlimited control over how to setup the car. Unlike their rivals Ferrari who have moved all control functions to the steering wheel, McLaren have done the opposite. They have kept the steering wheel free of all controls moving them to the centre console instead.

Visibility from the cabin is also very good. The views out all angles of the cabin are good enough for a car of this style, meaning it is very easy to live with.

When it launched, the McLaren cost from £168,500 which is very close to its direct competitor, the Ferrari 458.

Since launch, depreciation has taken its toll. Due to the problematic launch, press fell shortly after the first models were delivered. Prices have now started to level out and supercar specialist Alastair Bols said, “people are waking up to the fact that it has investment potential”.

Which McLaren 12C Model Should You Buy?

Our pick of the bunch is the 2012 coupe. One of the first cars to be delivered from factory with the upgrade. You could pay up to £90,000 for a fairly well spec’d model, or close to £100,000 if you get one with a lot of carbon fibre extras.

Is The McLaren MP4-12C A Future Classic? Worth Investing Now?

As we mentioned earlier, top supercar specialists are predicting that the 12C has potential to become a real investment car.

The depreciation curve has done its damage, allowing many models to be reasonably priced (for a supercar). And values are starting to level out.

With only 250 or so coupes currently in the UK, there is certainly a low enough level of stock to raise demand. If you manage to find a nicely spec’d model with little mileage it could be well worth a punt.