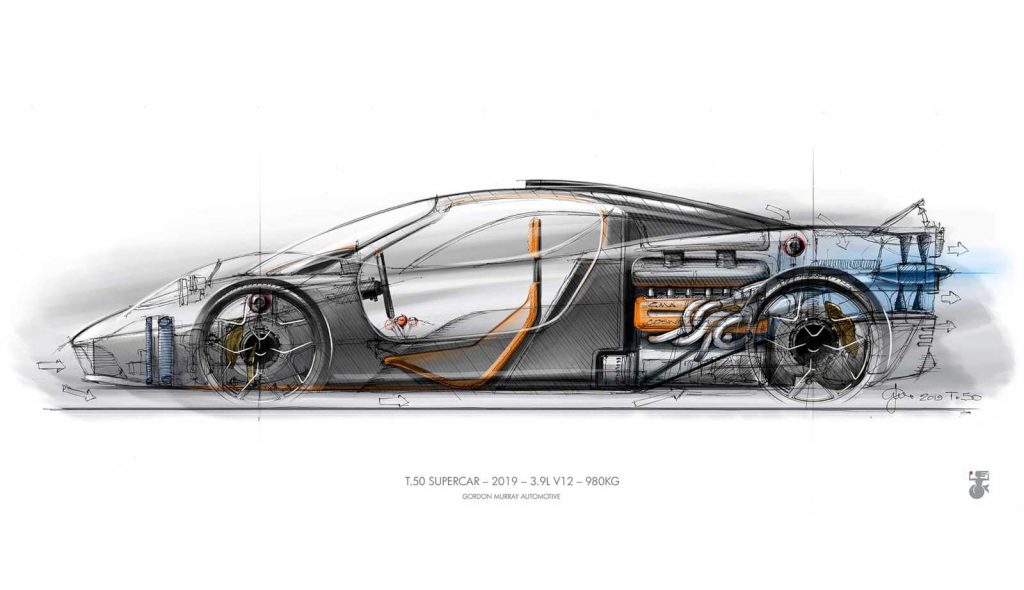 It’s been a long wait for a true successor to what many consider the best supercar ever created, the 1992 McLaren F1. Over 27 years in fact since the iconic McLaren F1 came and went.

Since then, British designer Gordon Murray has worked alongside McLaren for a number of years, heading the Mercedes-Benz SLR McLaren design team.

However since the SLR went into production over 15 years ago, there has been radio silence on Gordon Murray’s next supercar. With no true successor for the classic McLaren F1 ever coming to fruition.

Until now… The long anticipated wait for Gordon Murray’s next supercar is almost over. Gordon Murray has revealed his plans for a McLaren F1 successor in a video, where Gordon himself talks through the features of his new supercar.

The T.50 is aptly named as it is Gordan Murray’s 50th car design (including road and race cars) in the past 50 years.

Little is really known about the T.50, other than it will be a raw, no-holds barred successor to the McLaren F1. And it will be drawing on the design and aerodynamic philosophy that the F1 started.

Gordon describes his new supercar as “the purest, lightest, most driver-focused supercar ever built.”

The Highest Revving Supercar In The World Today

The new supercar will be equipped with an extremely high revving 3.9 litre, naturally-aspirated V12 engine. Developed exclusively for the T.50 by Cosworth, the new powerplant will be capable of delivering 650bhp while reaching 12,100rpm. This alone will make the T.50 “the highest-revving engine ever used in a production car,” according to Murray.

Paired with this amazing sounding V12 engine, the chassis will be built entirely of carbon fibre, allowing the T.50 to weigh just 980 kilograms. With most supercars today weighing around 1,400 – 1,600kg. This makes the new supercar around a third lighter than average.

This will give it an impressive power-to-weight ratio of 663hp/ton. That is more than any other naturally-aspirated supercar designed for road use. Impressive.

In his reveal video, Murray talks through key areas of development which he has lifted from previous vehicles. One such area is an intelligent use of underbody airflow management paired with a large fan at the back of the vehicle. This development was first used by Murray on his Brabham Formula One “Fan car” back in 1978. And the tech was also in action on the McLaren F1 road car.

Advanced aerodynamics such as this aid with the control of air flow underneath the car. By keeping a majority of the aerodynamics under the car, it keeps the visible body of the car free from wings and vents, giving it a cleaner form.

Another similarity between the T.50 and the F1 is the interior arrangement. The drivers seat will be mounted centrally giving them complete control and unparalleled feel and precision. While two passenger seats will be mounted either side, slightly set back.

Developed in Partnership With A Formula 1 Team

Gordon Murray Design have announced a partnership with a yet un-named Formula 1 team. This allows Murray the use of the team’s wind tunnel to aid with the development of the aerodynamics for the T.50.

The team at Gordon Murray Design and Gordon Murray Automotive are proud of the fact that they are sourcing all major components from UK based companies, including the powertrain, body and chassis. And the T.50 will be equipped with a specially designed lightweight six-speed transmission from UK specialist Xtrac.

Murray goes on to say that, “An unflinching dedication to lightweighting, highly-advanced active aerodynamics and world-leading standards of advanced engineering will ensure the T.50 rewrites the supercar rulebook. Our experienced team is applying the same uncompromising approach to design and engineering that shaped every facet of the F1, and they are able to deliver substantial improvements over that car in every meaningful way.”

There will only be 100 T.50 cars manufactured from it’s facility in Surrey. With each one will cost over £2 million.

The T.50 will be the first car ever produced by the newly formed Gordon Murray Automotive, and they will be ready for delivery by early 2022.

Watch the full reveal video below.