Investing in supercars can be one of the most rewarding investment methods for car enthusiasts. As with all investment methods, you do need a good understanding of the market, trends and upcoming car announcements.

We have written an in-depth guide of how to start investing in supercars. We recommend reading this before continuing down this article.

Generally most investment supercars undergo a sharp depreciation curve, before they bottom out and start to appreciate again. This is the point in time where you should commit to a purchase, just as the depreciation levels out.

The above is a general strategy that will serve you well on a consistent basis. However manufacturers have started to announce more and more limited edition production runs.

Due to the extremely limited nature of these models, they can prove to be lucrative if you secure yourself a brand new model. Collectors are often willing to pay well over the market value to secure a limited edition model.

The limited run McLaren Senna is a perfect example of this, with one recent model selling for over £300,000 more than its original sale price.

The cars below are a mixture of supercars which have depreciated and we believe are in that sweet spot where the depreciation has levelled out. We have also included a couple of new and nearly new supercars which we are currently fetching more than their market value.

The second generation Honda/Acura NSX has quickly become on of the highest depreciating supercars. This is partially due to the lack of sales since launch.

It was one of the slowest selling cars of 2018, with the Audi R8 outselling easily. This is strange as the R8 is very similar, with a similar power output and cost. In fact, in April 2018, Acura only sold 5 NSX cars over the whole month!

Could this generation be similar to the first? More popular when it is dead. We think so.

However Honda/Acura have confirmed that they don’t plan on manufacturing the NSX past 2020, so the only models available to purchase very soon will be used models.

Due to this, we expect demand to start to out way availability in the coming years, leading to the NSX starting to appreciate. 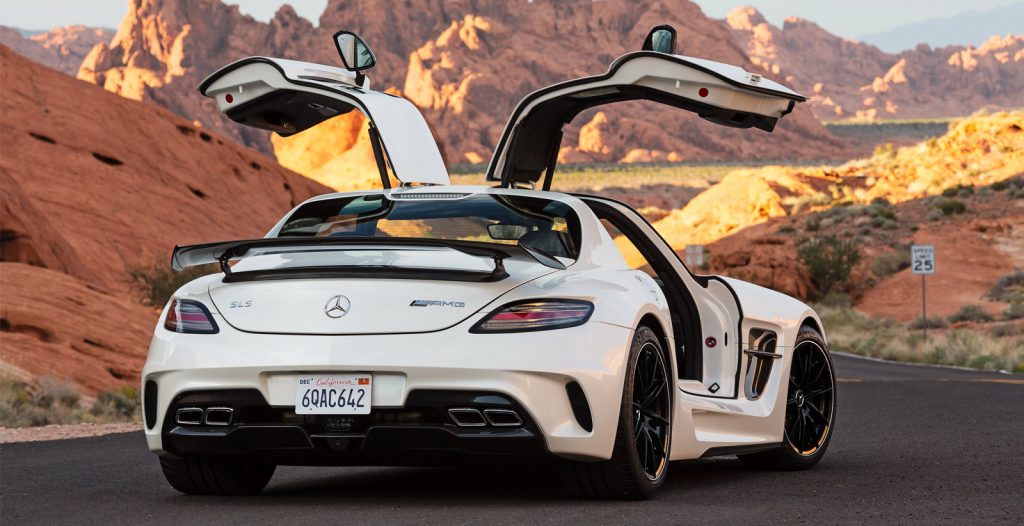 Potentially the last gullwing car for 30 years… This alone will ensure the value of the SLS maintains stable.

Over the past 8 years, the SLS has had a fairly strong depreciation curve, bottoming out at only 60% of its original value. Making it one of the slowest depreciating cars of the past 20 years. This gives investors a great platform to start from, and a solid indication that this car will be in demand for the coming years.

The AMG department at Mercedes-Benz did show their madness when they produced the SLS AMG Black Series. This model was an extreme version of the German supercar, and was inspired by their GT3 racecar.

The upgrade included a host of extreme visual modifications and a performance increase to 622 bhp. This made the SLS AMG Black Series the fastest ever production car that the AMG tuning division had ever built.

Prices for this limited edition supercar started at £229,935. There is believed to only be 15 RHD variants of the SLS AMG Black Series in the world and values now easily exceed £400,000.

If you are looking at purchasing an SLS as an investment car, we 100% recommend purchasing one of the gullwing coupes. They will undoubtably hold their value much more than the convertible.

The Audi R8 sold incredibly well. This is no surprise when you think it is a supercar just over £100,000 and built by one of the best German manufacturers. This would also make you believe that they are readily available for not very much money. And that is true in the most part.

You can pick up any old V8 Audi R8 for as little as £30,000. However, towards the end of the first generation R8’s lifespan, Audi released the V10 Plus model. Most of these were automatic, making it very hard to find a manual varient.

Due to the trend in motoring, and Audi confirming that the replacement car for the Audi TT and R8 will feature electrification, the manual V10 plus is the last ever V10 Audi will ever make. Read Audi’s press release confirming the electrification of the next Audi R8 here.

We also have a very strong opinion of the Audi R8, as many of us have owned the first generation car. Many of us also sold them due to the high depreciation curve initially. Although we still maintain the fact that they are one of the best attainable supercars around. Read our review as to why the Audi R8 is the best everyday supercar.

Porsche revealed their final special edition 991 at the New York Motor Show in 2019. The 991.2 Speedster is the last hurrah and final send off for the 991 generation 911. And it instantly became a fan favourite after its reveal.

Only 1948 Speedster cars will be made, a throwback to mark the 911’s 70th anniversary. With this being the last 991 that Porsche will manufacturer, and due to its heritage we can expect this car to quickly appreciate over its initial price of £211,599.

The Ford GT is destined to be an appreciating classic supercar. Since its inception in 2004, the Ford GT has always been a hit with investors and collectors. This is partially due to the exclusivity and popularity of the original GT40, and partially because this GT was the first reboot of the classic formula.

Again since the second generation Ford GT was released, it has only increased the popularity of the first generation model, and prices are consistently rising.

The GT has gone through a few pricing slumps since its inception. Recently the pricing fell because the market was over saturated with Ford GTs. Many owners looked to offload the first generation model to trade up to the new generation, allowing the market to become flooded with used Ford GTs for sale.

This provided new investors a great chance to get on the investment ladder, although prices are starting to recover now. The Ford GT still makes an ideal investment choice in 2019 as availability will only lower, and the first generation GT will be a future classic.

Remember, with cars such as the Ford GT which will increase in value over the next 10 years, mileage matters! True collectors will want pristine examples with very low mileage. For more information on what makes a great investment car read our supercar investment guide.

Last up, we have an iconic supercar which has quadrupled in value since its release. The iconic Ferrari Enzo is now worth well over £1,500,000 and is continuing its trend upwards.

Only 400 Ferrari Enzos were built between 2002-2004, and those examples with low mileage on the clock have increased dramatically in value.

One of the reasons for its heavy appreciation is due to it being one of the last flagship cars built without hybrid technology.

There you have it, 6 cars to keep an eye on and scoop in 2019 or you might regret it forever, especially when you look at pricing in 2-3 years and wonder, what if I wouldn’t have hesitated then?